The Book of Lost Fragrances by MJ Rose 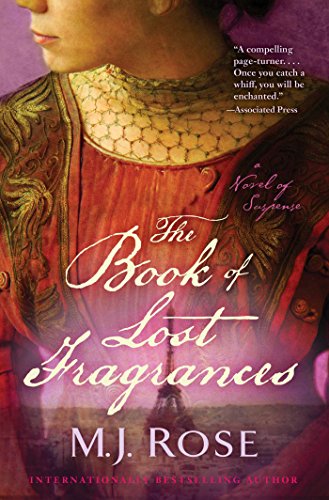 I wanted to read this book immediately after I read the premise.

Jac L’Etoile is a successful author and TV personality who hosts a show about myths. She comes from a long line of famous French perfumers, but she’s walked away from the business. It’s not until the business is in trouble and her brother goes missing in Paris that she returns to confront her past. Her mother’s suicide, a father suffering dementia, and troubling visions all connected with scent threaten to derail Jac from finding her brother.

Jac learns her brother has resurrected a family legend tied to an ancestor who discovered a scent created in Cleopatra’s time that could induce memories of past lives. Of course, Jac is highly skeptical of the idea, but as her own visions intensify bringing her closer to her dead mother, images of ancient Egypt and the French Revolution begin to emerge all calling her sanity into question. Evidence comes light that forces Jac to consider whether her brother may have been killed for Cleopatra’s secret scent. An esoteric society along with the Chinese government all have designs on the powerful perfume her brother was protecting. Interestingly, the brother’s only wish is to get the scent into the hands of the Dalai Lama who can use the memory tool as possible evidence for reincarnation.

I found the idea of scent as a possible device for unlocking past life memory original and irresistible. The visions/past life memory segments of the book were well done. The book reads like a thriller and that’s a plus for me. There is a romantic element woven in that’s kind of cliché but necessary for Jac to resolve her karmic past. I appreciate the author’s research into scent and the history of the perfume industry and did not find it distracted from the plot. I love that kind of detail! Unfortunately, two little details irked me. The Dalai Lama wears burgundy robes not saffron (saffron is worn by Southeast Asian Buddhists). There is also a lot made out of the Dalai Lama being inaccessible and unreachable by Jac’s brother which is not true. His Holiness travels and has a full calendar. He meets groups wherever he goes and he holds meetings in Dharamsala. I know people who have met the Dalai Lama so he is far from unreachable.

Overall, this is an interesting book that moves fast and keeps the reader’s attention while introducing a little known industry. While I didn’t realize it at the time, this book is part of a series on reincarnation by MJ Rose. Some of the reviews for this book indicate she’s hit her stride with this one.