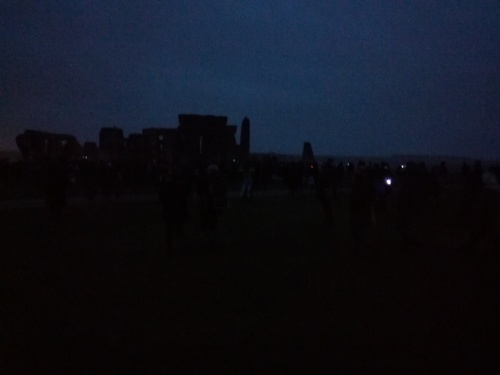 I’ve always hated my birthday. December 21 falls too close to Christmas for it ever to have been celebrated like a normal birthday. As a child I can remember (and remember vividly) the one and only birthday party where I had neighbor kids over. The rest of the time, birthdays were small family events squeezed in among the hubbub of Christmas. Not fun and not special. That coupled with the yearly reminder from my mother that I was born on the darkest day of the year did much to cement my feelings of apathy about my solar return. For a few years, I moved the event to January hoping for a better outcome. But there was no escaping it. 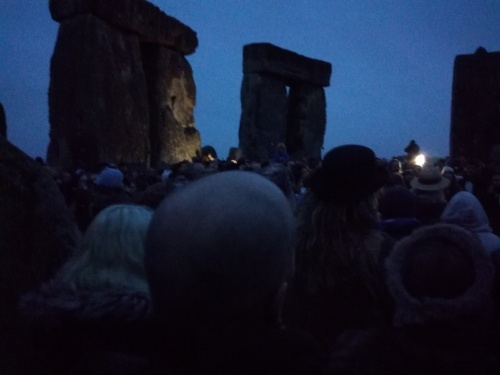 2017 turned out to be quite an eye-opening experience living abroad, and in an attempt to take advantage of some once in a life-time opportunities, I thought maybe this year marking my birthday with the rising sun of solstice at Stonehenge would make a memorable birthday. It was!

The tour bus left London in complete darkness at 4:20 AM and we made our way to the plains of Salisbury where we picked up some light rain. We were given the option of walking 50 minutes to the site or waiting for a shuttle bus. Luckily, the English Heritage organization that controls access to Stonehenge has done this for years and there were plenty of shuttle buses, so we boarded the bus and rode. We were dropped off, in the misty blackness at the edge of a parking lot with hundreds of others. All along the way, my husband and I were looking for the famous stones to orient ourselves but even standing with the crowd, we had no idea in which direction we’d eventually be led.

Finally, someone from English Heritage ventured by with a flashlight to tell us that they were waiting for some light before they’d open the field for us to go up to the site. When someone asked her where, she gestured to the left behind a wire fence where again we saw nothing. The crowd was animated. In the distance and to the left, drums beat, and a lone bagpipe played. More shuttle buses came and left, and we waited. 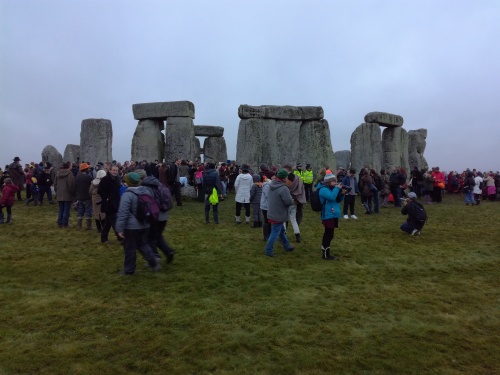 Not long after, the stones were lit on the hill above us and the pasture fence dropped. Stonehenge emerged from the black night on the first morning of winter. Druid drums beat a rhythm as the crowd and I were led through the marshy pasture and up to the historic site. I felt very emotional going up the hill and had to focus on my breathing to circulate the energy. Whether this was a reaction to ley lines, the crowd’s festive spirit, or my own internal work I don’t know, but it was powerful and deep (and Scorpionic?). There was a sense of rightness in this crowd moving up to take back this site.

By the time I reached the stones, several hundred people were already massed in and around the site. Stonehenge is a relatively small area. The center was held by Druids and pagans who had begun their ceremonies. Eager to join in, my husband and I moved in as close as we could. Our initial position was just outside the center ring. Gradually things began to lighten. We honored the four directions and offered prayers of peace being led by, I believe, a Druid priest. We chanted, sang songs, and summoned the ancestors. It was a festive, lively, and inclusive ceremony. The official sunrise came without notice as the clouds never permitted the sun to shine. Once the ritual part of the gathering had concluded, a group of pagan singers dressed in red streamed into the center of the stones and led the crowd in more songs. After a while, it felt like time to leave and my husband and I walked around the circle. I had a chance to touch some of the stones and walk the grounds of the site.

One of the most important reasons to visit Stonehenge at one of the solstices is that people are allowed in among the stones and on the grounds. During the rest of the year, tourists are allowed only to walk a paved path behind a barrier around the site. Those restrictions have been in place for some years now to protect the site. Only on limited rare occasions can visitors access and touch the stones (although technically you’re not supposed to, but everyone does).

Stonehenge is positioned on the top of a gentle hill with a panoramic view of surrounding fields. It’s isolated and unexpected, retaining its mystery. I settled on a fallen stone with some others. Revelers in the distance kept up the party atmosphere as I dropped into a healing mediation with the aid of the beat of a steady drum. It was easy to ground and go deep. I emerged sometime later, cold and stiff. It was time to leave. 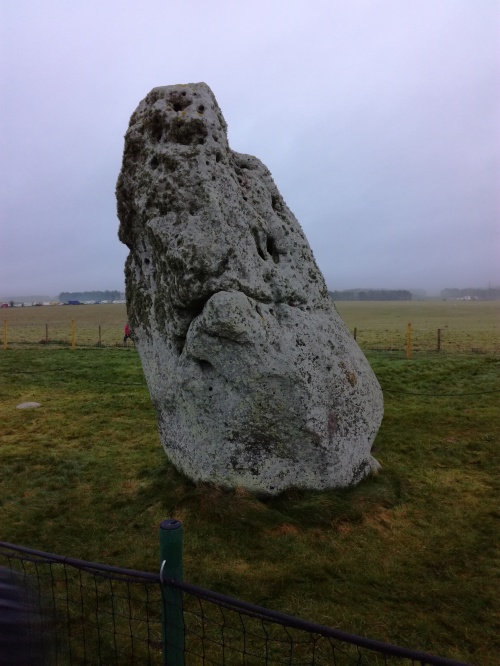 The visit had been characterized by three different phases. First, there had been the emotional climb to the site. The stones themselves and the experience of greeting the solstice was joyous and a shared one. The final phase was solitary, deep, and healing. No bolts of lightening but more a gladness that I’d been there. That this birthday was memorable and special.

I was surprised that I had not felt more in the way of energy at the site, but then I had done some shielding ahead of our arrival. An unexpected thing happened the next day in London though. While we were waiting to get the underground, I suddenly started running energy that intensified in my palms. This lasted for some time and I think was connected to the previous day’s work. So, I’m keeping an open mind and we’ll see where this goes. Maybe a blog in the future.