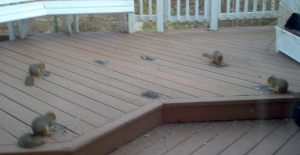 The Christmas tree is up and as I peruse ornaments collected over decades, I’m struck by how many of them are animals. There are cats and dogs, rabbits and squirrels, hedgehogs and birds (a humming bird, blue jay, goose, partridge), and cows and horses. At the back door, I struggle with getting sunflower seeds and nuts out for my squirrels. Three inches of snow have to be cleared before I can lay down six piles of seed to accommodate the squirrels. After our dog died, we started feeding birds off our deck but soon found the squirrels to be more entertaining. The birds still come to the feeder and the overflow trickles down to feed a family of field mice who will come onto the deck once the squirrels have had their fill. I won’t see the bunny today because the storm is intensifying but I take comfort that I’ll see him tomorrow once the snow melts off. He was here earlier though; because I see his tracks crisscross the yard. The ornaments on the Christmas tree and the activity in the backyard scream BEATRIX POTTER. I live in a world she knew. 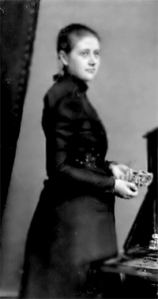 Helen Beatrix Potter was born in 1866 in London. She is best remembered for her children’s stories featuring animals. As children, she and her brother spent many happy family vacations in Scotland and the English Lake District. Undoubtedly, the freedom to explore and interact with nature as a child grounded Beatrix in the natural world and fostered her connection to the land and its creatures. She and her brother made pets of wildlife including rabbits, a hedgehog, mice, and bats. Beatrix’s talents in drawing and painting emerged in childhood and were encouraged by her parents. In her teens, she wandered the Lake District sketching and immersing herself in nature. She took a keen interest in archeology, geology, entomology, and mycology. By the late 1890s, she had become adept at scientific illustration concentrating on watercolors of local fungi. She even had a paper on fungi reproduction presented at the Royal Botanic Gardens (women were not allowed to attend).

It wasn’t until her mid- 30s that Beatrix took a set of picture letters she had written to children and turned them into her first book. She had The Tale of Peter Rabbit printed in 1901. Publishers turned down the opportunity to publish the book failing to see its merit (think Harry Potter in the Edwardian Age,  JK Rowling was also turned down by multiple publishers). Along came Frederick Warner who published The Tale of Peter Rabbit with color illustrations the following year. Beatrix’s book was highly successful and so were the two (The Tale of Squirrel Nutkin and The Tailor of Gloucester) that came soon after. From then on, Beatrix published two or three books a year. Later her interests in farming and preserving the Lake District became foremost in her life, but she is still remembered fondly for the animal characters and stories she created.

52 responses to “A BEATRIX POTTER CHRISTMAS”