HAS (MS 408): THE VOYNICH MANUSCRIPT BEEN DECIPHERED?

This is an update to a blog I did in 2012 about the Voynich Manuscript. Recent work done by Dr. Stephen Bax (Professor of Applied Linguistics, University of Bedfordshire) has resulted in some startling findings. 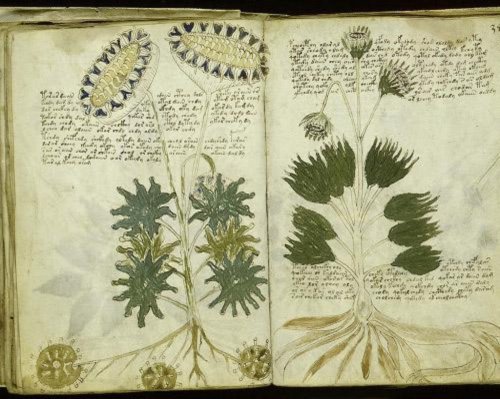 I love tales of missing manuscripts especially in fiction, but also in non-fiction. Last week, I finished The Swerve which featured the true story of the recovery of Lucretius’ poem, On the Nature of Things, and how it influenced our modern world. I liked the idea of a Renaissance book hunter slipping into monasteries looking for ancient wisdom. But I have a better story to share.

In 1912, Wilfrid Voynich recovered a mysterious manuscript that bears his name and resides in the Yale Library as Manuscript 408. The curious document has defied the patient and persistent attempts by all amateur and professional cryptographers to break it.

Its exact history is sketchy, but the document is alleged to have belonged to an Emperor, several practicing alchemists, and a religious order. Some have even proposed that Roger Bacon or John Dee authored the manuscript.

Consisting of 240 vellum pages with colored illustrations, the writing script is unknown and unreadable. Many of the illustrations resemble herbal texts of the 15th Century except that only a few of them can be identified. Aside from the herbal renderings, there are also illustrations covering topics on astronomy, biology, cosmology, medicines, and recipes. The drawings are fanciful, colorful, and complicated. Carbon-14 dating in 2009, dates the manuscript to between 1408 and 1438.

The text itself has puzzled for decades and even modern computer tools have proved ineffective. The writing itself seems to progress left to right with no punctuation. There are no obvious corrections, the document being very carefully executed. There are some 170,000 separate glyphs utilized throughout and many are used only once or twice. Statistical analysis of the work reveals that it resembles the flow of natural language. But what language? It seems to share some correspondences to English and Latin, but not entirely. The repetition of the glyphs is not a characteristic of European language.

Manuscript 408 remains the only undeciphered Renaissance manuscript and it continues to draw many into its mystery. Some think it’s an early herbal or medical text. Others see it as a work of alchemy (early chemistry) or hermeneutical teaching. Still others have declared it a hoax, but if it is a hoax of some kind, it goes beyond anything produced in the 15th Century. It goes beyond the codes and cyphers used then, and continues to evade codebreakers today. What is this curious work and who penned its bizarre contents?

For those intrigued enough to read further:

The Friar & the Cypher- Lawrence Goldstone

Drawing on work done to date, Dr. Bax undertook a detailed look at some of the plants and signs in the manuscript. He began with some of the speculations on plant names to decipher letters within the text. He believes he has deciphered ten words and fourteen signs to begin the process of identifying the language MS 408 was written in. Dr. Bax believes the manuscript is not a hoax, but rather a 15th Century book on nature written not in code but rather an unknown language. Now, the hard work begins to try to reveal more of the manuscript. It seems like this is an instance when having the right experts makes all the difference.

50 responses to “HAS (MS 408): THE VOYNICH MANUSCRIPT BEEN DECIPHERED?”